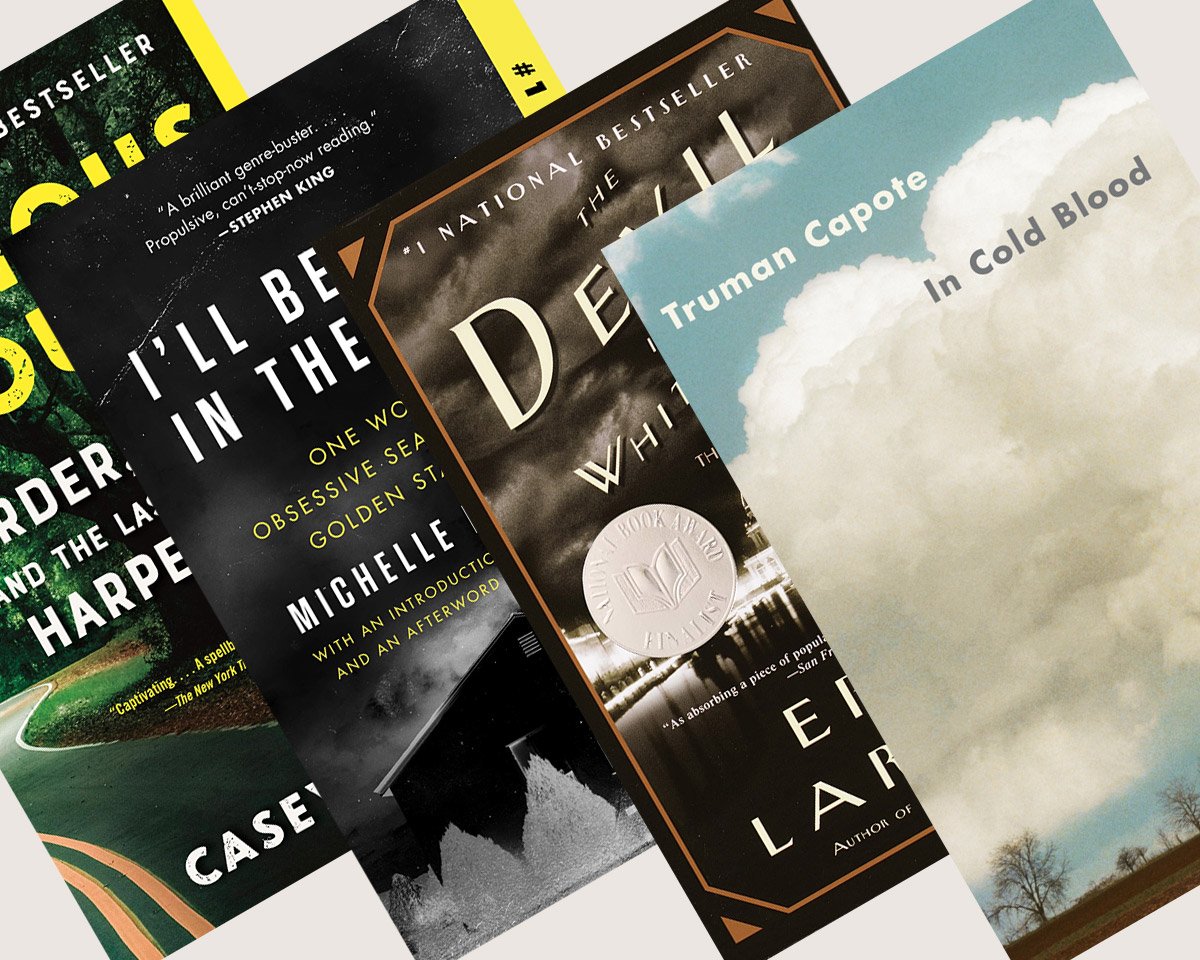 True crime is a fascinating genre to read because it’s not really fiction, but often feels like it.

We are presented with a mystery that often seems strange to the point of being bizarre, then are walked through the steps taken to solve that mystery. It can feel like solving a puzzle, taking a deep dive into the eccentricities of human nature, and watching a really strange—and bloody—soap opera all at once.

So of course it’s going to be one of the best-selling and most-loved genres of books on the market.

There’s also an interesting phenomena where humans are fascinated with “evil” while still being utterly decent members of society—they want to “walk safely on the dark side” through the stories they read.

Whether you’re an amateur sleuth, a budding law enforcement professional, or someone who just loves a really compelling story, you’re in luck.

Below, I’ve compiled a list of what I consider to be the 10 best true crime books.

Let’s be honest: there are going to be so many more excellent books, that it’s impossible to list them all.

But hopefully you’ll find that the books I’ve chosen as the “best” below offer the most riveting reads, the most compelling cases, and a truly wonderful time reading about real-life crimes by real-life people.


In Cold Blood by Truman Capote

This story was written by renowned American novelist Truman Capote (of Breakfast at Tiffany’s fame) and researched with the aid of Harper Lee (of To Kill a Mockingbird fame), so you know it’s going to be a truly riveting read.

In Cold Blood tells the story of the Clutter family, a Kansas family murdered in their own home. Through the pages of the novel, you’ll not only get the story of those leading the investigation into the shooting, but also the story of the ones who committed the murder.

To add extra depth, real-life interviews with people who knew both the murderers and the victims are sprinkled throughout. It’s got enough added color and flair to read like an amazing novel, but all the important details are fact-based and thoroughly researched. It’s considered one of the greatest—and most compelling—true crime novels of all time.


Killers of the Flower Moon: The Osage Murders and the Birth of the FBI by David Grann

In the pages of Killers of the Flower Moon, you’ll read about how the newly formed FBI, led by J. Edgar Hoover, worked with Texas Ranger Tom White to uncover the true identity of the murderer, as well as the bloody sequence of events that led to the deaths of so many members of the Osage Nation. It’s a gripping exploration of the lengths to which greed can drive people.

Not all the “best” true crime books have to be about murder, a fact that John Carreyrou proved compellingly.

Bad Blood documents the rise and fall of Theranos founder—and consummate con-woman—Elizabeth Holmes, a woman who promised an absolute marvel of biotechnology (being able to pull health data from a single drop of blood) and defrauded investors out of millions of dollars because no such technology existed.

Follow Carreyrou on his journalist journey from the very beginning, receiving a tip about the fraud of Theranos, and join him as he builds his case by painstakingly adding new facts and details until the day he finally has enough to bring it all crumbling down. Not a single murder takes place, but it’s no less compelling a read for the absence of violence.

Between 2007 and 2010, a brutal serial killer terrorized young women on Long Island, New York. Lost Girls, written by Robert Kolker, is a thorough and exhaustive investigation into the circumstances of both the victims and the serial killer.

It’s a gritty, insightful read into both the depravities of which humans are capable and the grim reality that many young women in the sex work industry face.

So compelling is the story, in fact, that it was turned into a film (2020, available on Netflix). Most intriguing of all is the fact that the Long Island serial killer is still at large and unidentified to this day.


The Grim Sleeper: The Lost Women of South Central by Christine Pelisek

For decades in the late 1900s and early 2000s, a serial killer known only as the “Grim Sleeper” terrorized South Central LA. His victims: all women of color, all chosen from poorer areas of Los Angeles. What made him so difficult to catch was the fact that he had years-long “cooling off” periods between kills, when he would go utterly dormant—until he struck again and another victim’s life was ended cruelly.

The Grim Sleeper is so much more than just a fascinating true crime novel; it’s an exploration of the harsh reality that so many in poverty-riddled and high-crime areas often face, largely that both the press and law enforcement tend to overlook and neglect victims from those areas.

It’s an eye-opening and truly sobering look into the deep-rooted societal problems that allowed a serial killer to continue killing for nearly 20 years.

Harper Lee, of To Kill a Mockingbird Fame, was so much more than just a novelist—she was also fascinated by and dedicated to solving unsolved crime. Often to the point of obsession, as we discover in the pages of Furious Hours.

This book chronicles the case of Reverend Willie Maxwell, a small-town preacher on trial for killing five of his family members. Though he escaped justice, he was assassinated at his family’s funeral. Curiously, his assassin was defended by the same lawyer who helped Reverend Maxwell escape justice—and it was this assassin’s trial that drew Harper Lee’s attention.

Furious Hours dives into Harper Lee’s obsession with getting all the details right—intended to be written into her next book, titled The Reverend—and finishes telling the story that she was never able to before her death.


I’ll Be Gone in the Dark by Michelle McNamara

I’ll Be Gone in the Dark is considered one of the greatest modern masterpieces of true crime fiction, a testament to all the work invested by the author. The fact that she passed away during its writing makes it an even more compelling story, a legacy that endures beyond her life.

In the book, you’ll read about the Golden State Killer, a notorious serial killer that ran rampant in Northern California during the 1970s and 1980s. So compelling a story is it that HBO made a documentary influenced heavily by the exhausting investigative work that went into attempting to identify the cold-blooded killer.


The Devil in the White City by Erik Larson

In Chicago in the early 1890s, a serial killer struck repeatedly, killing those attending the 1893 World’s Columbian Exposition. His methods: setting up a fake hotel next to the fairgrounds, and luring unsuspecting victims to stay the night, putting them within his grasp and leading to their grim murders.

The story may be true, but it’s presented in a truly gripping novel format that makes it an engaging read from start to finish. Not only is it the story of H.H. Holmes, considered the first modern serial killer in America, but it also dives into everything that went into crafting the world-famous fair, the work of both Daniel Burnham and Frederick Law Olmsted. Get ready for a captivating and breathtakingly suspenseful read!

Ron Stallworth had the distinction of being the first black detective to ever join the Colorado Springs Police Department, but when the chance to join the infamous Ku Klux Klan presents itself—in the form of a classified ad—he has to seize the opportunity.

At first, he communicates with the Klan only through correspondence, but when the time comes to present himself in person, he has no choice but to rope in the help of his partner and fellow detective, Chuck.

Black Klansmen follows Stallworth on his investigation into the rising Klan during the late 1970s, a truly audacious and daring investigation that led to the exposure of white supremacists in the U.S. military and the formation of a “friendship” with Grand Wizard David Duke.

It’s a crime thriller with every detail true-to-life, and a fascinating look into the fractures just beneath the surface of American society that allow organizations like the KKK to not only exist, but thrive.


Donnie Brasco: My Undercover Life in the Mafia by Joseph D. Pistone

Few criminal enterprises are as fascinating and compelling as the New York Mafia, criminal syndicates run by five influential Italian families in New York City. So of course a book about the adventures of an undercover FBI agent infiltrating the Mafia is going to be a truly fascinating read.

Written by the FBI agent himself, the book details his activities of going deep-cover to work his way first into truck hijacking gangs, then into the Mafia itself.

Masquerading as Donald “Donnie” Brasco, an expert jewel thief from Miami, he worms his way into the Colombo crime family, then the Bonanno crime family.

The story reads like an adventure and offers amazing insights into the operations of one of the most powerful criminal organizations in the United States, ending with the successful convictions of more than 100 mafia members.