The 10 Best Fantasy Book Series of All Time 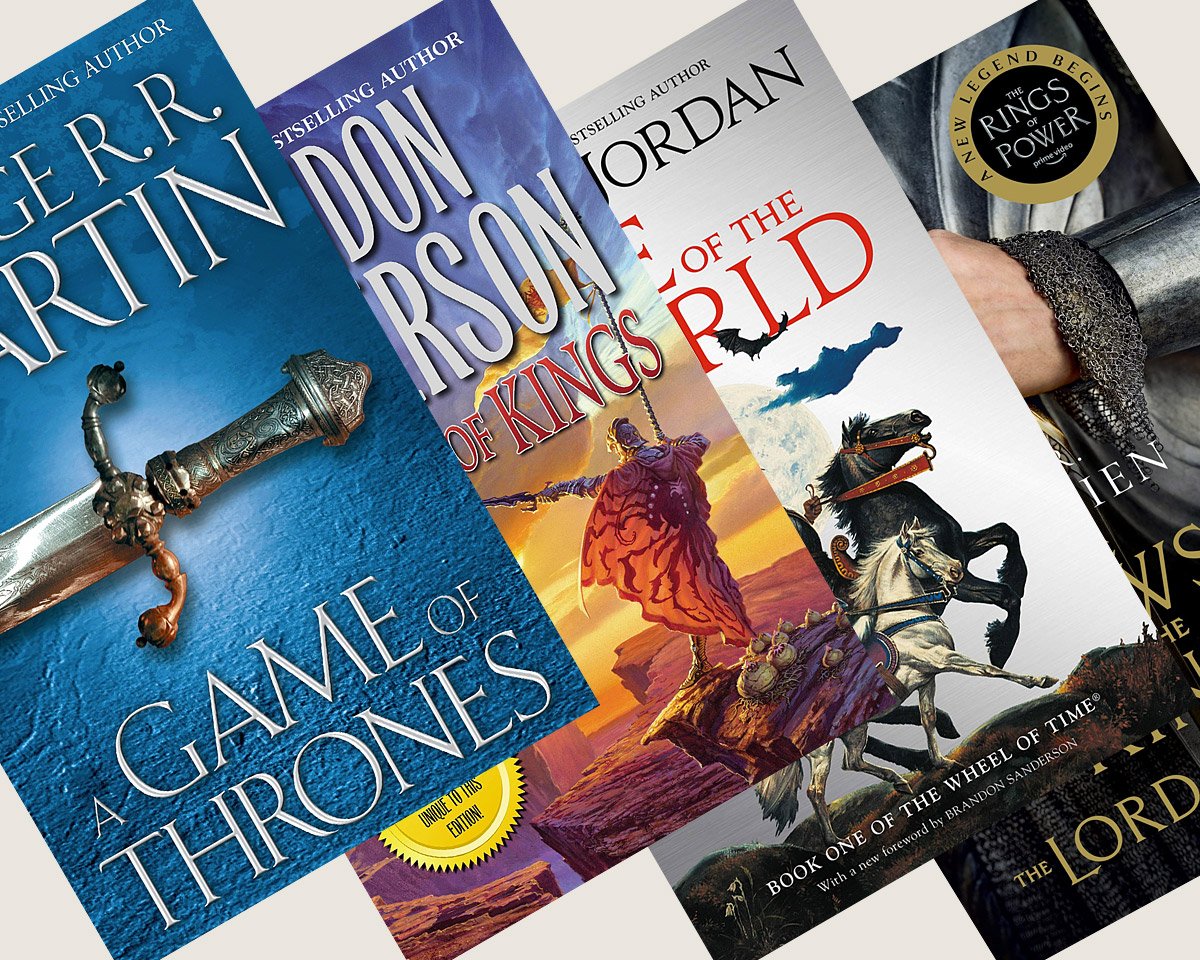 Asking any group of fantasy readers which are the “best fantasy books” is a truly dangerous proposition.

Because there are just so many amazing books to choose from.

And I mean that 100% literally: from among the thousands of epic, awe-inspiring, moving, action-packed, and breathtakingly beautifully-crafted stories authors have gifted us for over 100 years, it’s pretty much impossible to narrow it down to just a few.

But I’m going to give it a try!

Long before I got up the courage to write what is now the Darkblade Series (my first of 40+ novels), I was a die-hard fantasy reader—and still am to this day. I’ve read every one of the books on my list below multiple times, and will highly recommend them to anyone who asks for fantasy book/series recommendations.

Check out my list of the best fantasy books below, and perhaps you might just find yourself a spectacular new read—or an old, familiar favorite.

I’ve also put together a list of what I think are the best science fiction books if you’re curious.


Lord of the Rings by J.R.R. Tolkien

Is there any other book series truly deserving to top this particular list? Lord of the Rings is the first epic high fantasy novel series, and to this day, one of the absolute best.

Few stories are as memorable as Frodo’s journey to throw the One Ring into the fires of Mount Doom, of Aragorn’s battles beside the elf Legolas and dwarf Gimli against hordes of orcs, of Gandalf’s plunge into the depths of Moria while fighting the terrible Balrog, and, most of all, the courage and loyalty of Samwise Gamgee.

Even now, nearly a century after its release, it is still one of the best-loved and most-read fantasy series. And the movie series by Peter Jackson is still regarded as one of the best movie trilogies of all time—not fantasy movies alone, but in any genre.


Conan the Barbarian by Robert E. Howard (and others)

Before there was Lord of the Rings, there was Conan the Barbarian, the fierce, ruthless, utterly unstoppable reaver of Cimmeria.

Robert E. Howard’s sprawling series of short stories and novels introduced fantasy readers to entire corners of our world as of yet unknown—or lost to time—with breathtaking and daring adventures taking place in the mystical and marvelous Hyborian Age.

Thief, warrior, rebel, and king, Conan was everything readers love, never defeated, never equaled, always emerging triumphant at the end—often with the love of a fair maiden to boot.

Though Robert E. Howard only wrote 21 Conan stories over his lifetime, over the years since his death, multiple writers have taken up the pen and continued his truly amazing story.


Wheel of Time by Robert Jordan

As Lord of the Rings introduced the world to a new flavor of story (grand, stirring epics), so, too, did Robert Jordan’s Wheel of Time.

Inspired by the great works of J.R.R. Tolkien and others, Robert Jordan penned the world-spanning journey that started with five youths from a town in the middle of nowhere, who grew into the heroes needed to save the world from Shai’tan, the Dark One.

Though the author died before completing the last book, his protégé, Brandon Sanderson (see below) saw his life’s work to fruition, and with it forever established the Wheel of Time as one of the greatest works of fiction ever written.


The Kingkiller Chronicles by Patrick Rothfuss

Where Robert Jordan strove for the grand and epic, The Name of the Wind excels in bringing to life people and making them feel truly relatable and real.

The prose itself is glorious, with writing that seems to sing on every page and brings images to life in your mind with vivid clarity. The main character, Kvothe is flawed yet utterly believable as the “hero” to follow, and the magic system is complex but understandable enough that it draws you in.

There are no grand battles or world-shaking magical displays; no, the story is much smaller, a coming-of-age tale that shows the truth of regret, loss, and love.

Unfortunately, we readers have been waiting on the promised third (and final) book since 2011, with no promise of its release anytime soon.


A Song of Ice and Fire by George R.R. Martin

HBO’s Game of Thrones put this series on the radar of the world at large, drawing in even non-fantasy readers from around the globe with its compelling narrative, gritty world, and complex political interplay between the many fascinating characters. But long before the show graced our TV screens, we fantasy readers had fallen in love with—and been utterly shocked by—the world of Westeros and Essos as written in A Song of Ice and Fire.

The story of the dynastic war among the many factions and houses of Westeros felt like something out of the history books, yet brought so beautifully alive that we couldn’t help being drawn in.

Though the last two books remain to be written (as with The Kingkiller Chronicles), we die-hards still hold out hope that we will one day soon learn who ascends the Iron Throne once and for all.


The Stormlight Archives by Brandon Sanderson

Before he took up his pen to complete The Wheel of Time series after the passing of his mentor, Robert Jordan, Brandon Sanderson was an established author in his own right, with the Mistborn series being a much-loved addition to the world of fantasy fiction. But his work on the sprawling epic instilled in him a love of grand-scale fantasy, and gave rise to The Stormlight Archives.

As Lord of the Rings and The Wheel of Time served as tentpoles to their eras, so is The Stormlight Archives to our modern era of fantasy fiction.

It’s as complex and awe-inspiring as the original “masters of fantasy”, but written for today’s audience, with modern sensibilities and themes that are relatable to current generations.

All wrapped up in a truly spectacular, action-packed, magic-rich story with compelling characters that you can’t help but love. With a planned ten books (four of which are currently released), it’s an endeavour of legendary proportions.


Chronicles of Narnia by C.S. Lewis

The Chronicles of Narnia were intended to be children’s stories, but over the decades, have become some of the best-loved fantasy novels by readers of all ages.

Every book takes you on a simple yet wondrous adventure through the realm of Narnia, home to talking animals and ancient magics. Through the eyes of children from our world exploring this fantastical kingdom, we come to understand the subtler truths woven beneath the action-packed adventures.

Though the work is heavily inspired by Christian apologetics, with Christian-based themes throughout all seven books, they were not intended to be allegorical, merely an expression of the author’s thoughts and opinions on the struggles the young heroes faced.

The result, however, is a book far deeper than it might appear on the surface, one that has shaped modern literature—both adults and children’s fiction—for decades.

Dragons have always been a beloved aspect of fantasy fiction, so any series that revolves so heavily around dragons is bound to be well-received. And yet it was the non-dragon characters—of Tanis Half-Elven, Tasslehoff Burfoot the kender, Flint Fireforge the dwarf, Sturm Brightblade the human knight, and the Majere brothers, Caramon and Raistlin—who were truly the best-loved of the series.

For through their rises and falls, strengths and weaknesses, we experienced what it meant to be a hero, and how even the mightiest heroes could succumb.

The Dragonlance novels were born from the Dungeons & Dragons role-playing game, among the first to bring the fascinating world into stirring, heart-pounding novels—of which, there are now over 190.


Icewind Dale by R. A. Salvatore

The Icewind Dale Trilogy did something fascinating: they took a typical “villain” (a dark elf, which had until that time, been typically an “evil” race) and created a flawed hero or anti-hero.

Drizzt Do’Urden was born to darkness, but found his way into the light, and within the heart his own people had tried to twist to evil, settled a deep sense of justice and a desire to search for good.

Drizzt’s stories are all fascinating tales that dive into the high cost of his fight to remain moral and upright, but every one is a thrill ride of swordplay, magic, intrigue, and epic battles.

Few characters have captured the imagination of fantasy readers like Drizzt the dark elf with hits magical blades and his faithful panther companion Gwynhevar.

The Forgotten Realms novels, of which these were the first, have gone on to become some of the most recognizable and best-loved fantasy novels of the modern era.


Malazan Book of the Fallen by Steven Erikson

Ask any fantasy reader what makes the Malazan Book of the Fallen so spectacular, and each will have a different answer for you. That’s because Malazan is an epic of such shockingly grand scale that it’s nearly impossible to absorb everything on the first, second, or even third reading.

No, it takes multiple journeys through the world of the Malazan Empire to peel away the many, many layers cleverly penned by Steven Erikson, and even then, there will always be more.

The scope is audaciously epic, the plot complex (and often mystifying), the characters fascinating yet so wonderfully human.

Among the ten books are countless moments that stay burned into your memory forever—from the Chain of Dogs to the half-moon of Anomander Rake to the magic of Dragnipur to the Crippled God himself.