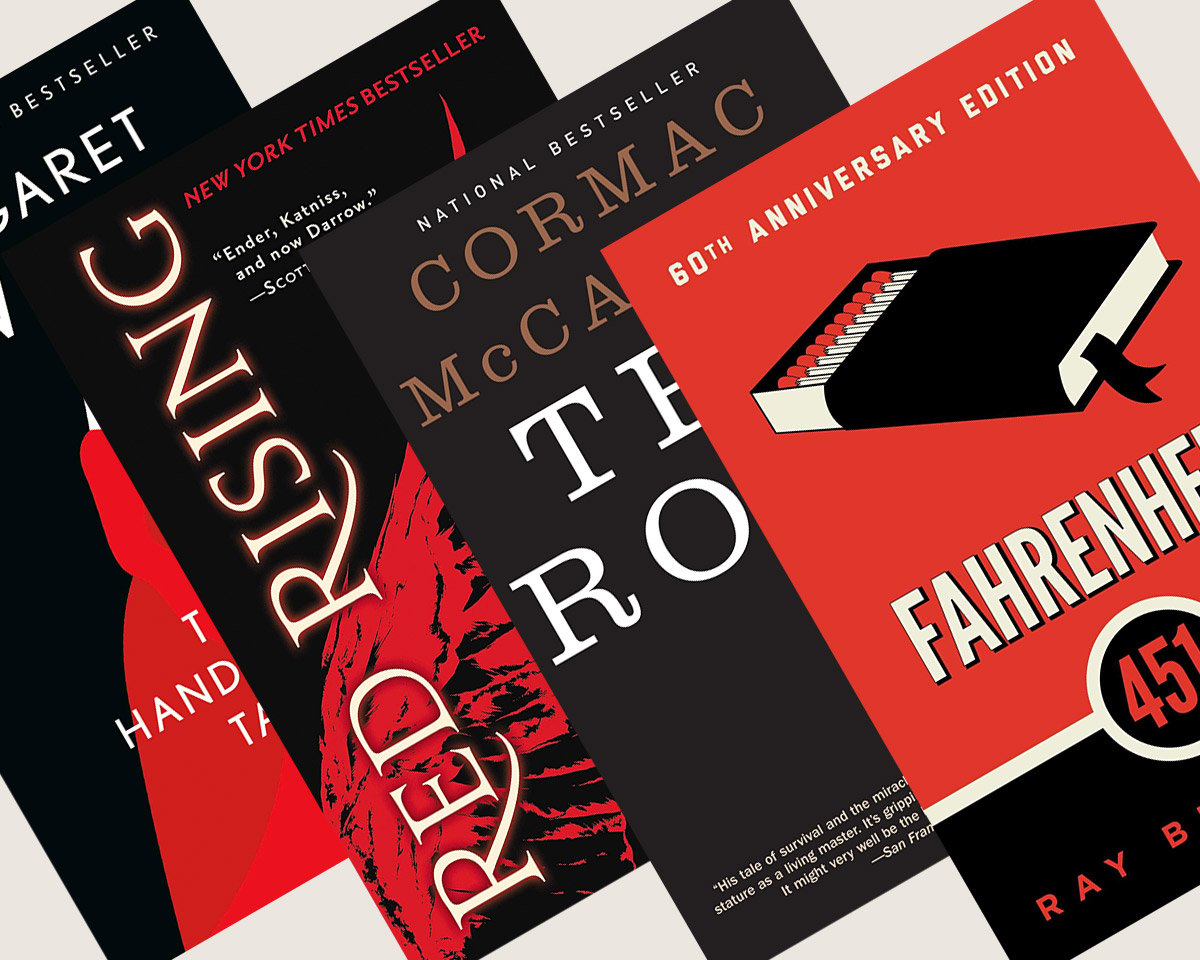 Dystopian fiction takes place in what can be fascinating settings—often beautiful or structured on the surface, but grim and twisted beneath—and offer insights into humanity, politics, religion, society, and even science through the lens of the story.

It offers a glimpse at a future that could be, taking modern, current ideas and evolving them (often to an extreme) to serve as a warning of how bad things could become if the worst elements in existence today were allowed to run rampant.

Few other genres allow you to explore such complex and interesting themes, and give authors a platform from which to convey their beliefs, comment on some element of modern society, educate their readers on what they believe to be a peril, or offer insight and critique.

Below, I’ve collected a list of some of the best dystopian novels, both my all-time favorites and those I believe to be hugely influential on the genre (and society) at large. Some of them have deeply influenced me in my own journey as an author, leading to the creation of “dystopian” fantasy societies like the Night Guild in my Queen of Thieves series.

You’ll find some truly gripping, heart-pounding, and (occasionally) terrifying novels that are absolutely worth including on your reading list.

A lot of dystopian fans will argue that George Orwell’s 1984 is the more accurate and influential of his dystopian novels. And, in many ways, they’d be right. 1984 shows the danger of technology and how words and the control of those words can breed power and tyranny.

But I’m including Animal Farm on this list because I believe the lessons it can teach are far more valuable.

Animal Farm starts off as the quintessential child-friendly animal story, but slowly devolves into a brutal critique of tyranny, the manipulation of the masses, and the corrupting nature of power.

The last theme is possibly the most important, as we all-too-often see abuses of power in our modern society.  In a world where government is always seeking more power and individuals are eternally striving for greater influence, it’s a reminder that those who are in power don’t always have our best interest at heart, and excessive control and influence can lead to the formation of dictatorships.

Fahrenheit 451 is set in a fascinating world where books are banned, where censorship runs rampant and anyone who seeks to explore deeper thought and higher rationale are punished.

The main character is a fireman not dedicated to protecting society from fires, but starting fires to burn books, art, and anything else deemed too “dangerous” or “radical” for the highly censored society.

Despite its dystopian setting, though, Fahrenheit 451 has a surprisingly hopeful tone, reminding us that exploration of creativity, art, freedom of expression, and, most of all, individuality aren’t just important, they’re necessary to retaining our humanity.

Brave New World is required reading for many high schools and colleges, and for good reason. It’s one of the most fascinating explorations of the dangers of technology, showing us how we can literally create our own dark, dystopian society through over-reliance on and unchecked exploration of technological limits.

In this story, humanity sacrifices family and relationships in the pursuit of “happiness”, but it is a fully manufactured happiness, one that is neither genuine nor lasting. It’s a stern warning of how dangerous our modern attitude of “immediate gratification” can be, a reminder that the full range of emotions—both joy and sorrow, happiness and sadness—are what make us fully human, and that we should embrace them rather than use technology to erase them.


A Clockwork Orange by Anthony Burgess

A Clockwork Orange is one of Stanley Kubrick’s finest movies, and one of the most influential dystopian films of all time. It’s based on a 1962 novel by the same name, one in which the themes of “choice”—the ability to choose between good and evil—feature heavily.

Essentially, the story boils down to one simple concept: is it better to impose morality upon humankind, or leave people with the freedom to choose even when that choice will so often lead to evil? The story takes a deep dive into humanity, showing the dichotomy that exists within all of us, the capacity for both great good and great harm. Truly a fascinating read.


Lord of the Flies by William Golding

Though children are the main protagonists in Lord of the Flies, the story goes to some truly dark, twisted places—and does so as a means of showing just what humans are capable of when corrupted by power or forced to extremes by the need to survive. It also shows the value of developing traits like respect, empathy, and responsibility, even when those traits are sometimes deemed “weak” by our modern society where everyone is grasping for power and wealth.

Another fascinating theme is summed up in a quote from the author himself, “The moral is that the shape of a society must depend on the ethical nature of the individual and not on any political system however apparently logical or respectable.”


The Handmaid's Tale by Margaret Atwood

Margaret Atwood’s The Handmaid’s Tale is a chilling, often bloody exploration of the dangers of inequality—in this case, between genders, but the concept holds true for any groups where one has power and control over the other.

The story shows what happens when not all have access to the same human rights and economic freedoms. It also serves as a stark reminder of the importance of women’s autonomy over their own bodies—essentially, an argument against modern society (often male-dominated) controlling women’s reproductive rights, showing just how politically and morally wrong it can be.

It’s also a fascinating look into the power of defiance, showing how just one voice can make a massive difference when it is used to speak out against tyranny and oppression.


The Road by Cormac McCarthy

The Road is a fascinating novel that looks at just how fragile our modern human society really is, how quickly humanity can devolve into cruelty, brutality, and ruthlessness in the name of survival. It’s also a reminder that in a loveless, hopeless, lawless world, human connections (family, friends, and loved ones) are often the only things that keep us tethered to our humanity.

One fascinating (and often overlooked) element highlighted in the story is the nature of the road itself—emblematic of our journey through life. The only way to reach our destination is to continue down the road at the pace only we can set. It requires patience and persistence to keep traveling, yet if we are so focused on the destination, we fail to see the beauty along the way. It’s both a lesson to “enjoy the journey” but also to “make the most of the time we have”.


The Hunger Games by Suzanne Collins

The Hunger Games series is one of the greatest of “modern” dystopian fiction, following the wild, bloody adventures of Katniss Everdeen on her quest to bring down the corrupt, all-powerful, oppressive Capitol.

Through the pages of this epic, gripping story, we explore the true nature of rebellion and defiance, the power of symbols, the price of freedom, and the danger of putting too much power into the hands of any one group of individuals (especially the ultra-wealthy).

The young-adult protagonist appeals to readers of all ages, and the action-packed story keeps you utterly engaged while subtly weaving in the threads of critique that make it a truly great dystopian novel.

The Divergent series is another riveting example of modern dystopian fiction done right. In a world where we are all struggling to find our own sense of individuality and identity in what can often feel like a rigidly defined society, it’s a wonderful exploration of the power of choosing who you are not based on what others think of you or want you to be, but who you believe you are.

It also highlights the dangers of ceding too much control of our lives—both literally and metaphorically—to corporations whose true loyalty is not to us, the consumers, but to the shareholders to whom the corporation has to answer. When society is shaped by small groups, the result can be truly grim indeed.

Pierce Brown’s Red Rising series is one of my all-time favorite novel series. It’s grim, gritty, harsh, and unforgiving, yet a fascinating look at what humanity can become—both for good and evil—when they are allowed to evolve (physically and metaphorically) to their full potential.

The character, Darrow, comes from the lowest strata of society, yet rises to the pinnacle through his refusal to lie down and be trampled, his persistence to keep fighting despite impossible odds. His actions, though small at first, set into motion a sequence of events that re-shapes society entirely.

Fair warning: the author is brutal in his killing-off characters. The more you like them, the more in danger they are. Never once in the five books currently published (with two more on the way) is the Red Rising series dull; it’s a true page-turner that will have you utterly addicted and desperate to find out what happens next to Darrow and his trusted allies.